“Peripherals” was original a term coined by Bangkok’s Property Consultancies to refer to locations outside the Capital’s Central Business District (CBD).

Interestingly, in what seems like an overnight shift some of these neighborhoods have been propelled into the spotlight. With areas in the four corners of the Capital, suddenly offering exciting potential to developers and investors. This buzz is understandable, as Bangkok’s urban development has historically experienced similar social and commercial shifts in its long history. With Rama 9- Ratchada, being the most recent example of a so-called Peripheral location that has now achieved the symbolic title of “Bangkok’s New CBD”! However underpinning Bangna’s sudden surge as a potential commercial hub, is the extension of the BTS Green Line which is gradually extending into neighboring Samut Prakarn Province. This massive mass transit extension complemented by the presence of BITEC Bangna the international trade and exhibition center, is highlighting the area’s potential as a key commercial hub. The construction of the Bangkok- Nakhon Ratchasima high-speed train line was launched end of last year and has put the spotlight on Bangsue. A purpose built railway station dubbed Bangsue Central Station will be developed to support the upcoming train line and all future rail connections. Interestingly, this ambitious infrastructure project may eventually connect Bangkok to Nong Khai (North Thailand), as part of the China led One Belt One Road (OBOR) network initiative!

On top of this, the State Railway of Thailand is planning to redevelop the area around Bangsue Central Station. This redevelopment project, will encompass an ambitious mix of commercial, retail and residential buildings effectively transforming the area into a transport and business hub.

This massive transformation, is also complemented by a series of mass transit extensions (BTS and MRT); the upcoming MRT Blue Line, MRT Purple Line and BTS Green Line extensions will eventually transform the area into a hyper-connected business and residential hotspot. Phahon Yothin- Ladprao is still largely viewed as a residential suburb, it is a popular location for the working professionals employed in Bangkok’s CBD neighborhoods. The area’s gradual surge in popularity, is fueled by the natural shift of Bangkok’s residents towards better value housing locations. The neighborhood, currently offers convenient travel times to Central Bangkok and commuters can access the Capital’s business centers (I.e. Asoke, Rama 9 and Silom/Sathorn) with relative ease. This Peripheral location is likely to reinforce its position as a desirable residential enclave, especially with the upcoming extension of the BTS Green Line that will bring greater convenience to local residents.

Finally it is important to note that the neighborhood is also located in proximity to the Bangsue Central Station Mega-Project, which will inevitably have a spillover effect on the area’s growth and development.

The appeal of this neighborhood as a potential residential hotspot is understandable; the Chayo Phraya River offers a serene and peaceful living environment. Its nostalgic and old Bangkok vibe, attracts a hip and trendy crowd and the area is now host to several independent eateries, coffee shops and bars. Many are claiming that the area’s lifestyle and entertainment options can rival even popular entertainment districts such as Thonglor or Ari!

A recurring theme in Bangkok urban development, is the impact of mass transit extensions and mega projects, Bangkok’s Riverside is a prime example of this transformation in action. The area is a beehive of Mass Transit line extensions (Notably the Green Line, Purple Line and Blue Line) and these new connections are breathing new life into this once forgotten section of Bangkok. The area is also welcoming an impressive collection of luxury residences, which include ultra-luxury residences such as The Mandarin Oriental Residences and The Four Seasons Residences. This residential gentrification is complemented by commercial mega projects, the most notable being Icon Siam by MQDC an ambitious mixed-use project comprising of super-luxury residences, high-end malls and a range of attractions (The Project is due to complete in 2023). This long road, stretching from Phra Khanong to Silom sits on the periphery of several of Central Bangkok’s most exclusive addresses from Silom, Ploenchit/ Wireless and even Phrom Phong. Usually regarded as a gritty and generally industrial area (Due to its proximity to the Port) the area is experiencing an unprecedented wave of development interest. This trend is understandable, land plots on Rama 4 are relatively better value than Central Bangkok; thus offering commercial and residential developers the opportunity to acquire large developable plots suitable for more extensive projects. On top of this, Rama 4 is strategically positioned, allowing road users in the area to connect to different parts of the city with ease.

Several Commercial Projects are in the development pipeline, with the most notable being “One Bangkok” an integrated district, spearheaded by the TCC Group. Several established developers have launched residential condos in the area notably Ananda with its recent launch of Ideo Mobi Rama 4.

This has been a quiet year for Bangkok’s real estate market, with most developers staying away from major project launches instead preferring to focus on Outer Bangkok locations and low-rise housing developments. This is...Read More When investors and homebuyers think of Bangkok condos, they immediately envision elegant and stylish newly-completed downtown projects! However, the Capital has an interesting opportunity that has always been hidden in plain sight… OLD CONDOS!...Read More 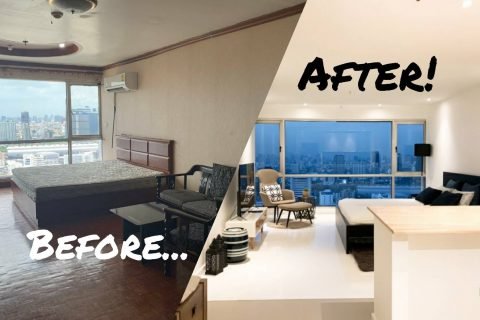