Bangkok’s biggest draw as a property investment destination is without a doubt its massive urban development potential and the dynamic gentrification of its neighborhoods. The transformation of the city is promising to create massive opportunities and lucrative returns for both developers and individual investors. However Bangkok can be a confusing city especially with its hundreds of intertwined neighborhoods and thousands of commercial and residential buildings! 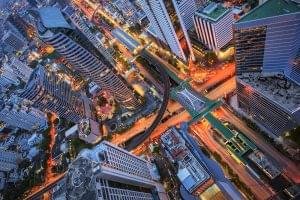 This guide will aim to highlight some of Bangkok’s up-and-coming investment hotspots. In this article, we will leave out Bangkok’s Central Business District (CBD) and focus on what property professionals refer to as peripheral or non-core areas. These areas include: Serviced by MRT Rama 9 and MRT Thailand Cultural Centre, this area north of Asoke is the center of a lot of media and development hype. Some property professionals are even dubbing it “Bangkok’s next CBD location”.

Rama IX-Ratchada is currently undergoing a massive commercial and residential transformation. The most notable project is an ambitious mixed-use regeneration plan by G Canal Land that will be spread over 73-Rai plot of land; it will comprise of a series of Officer Towers, Shopping Malls and Residential Condos. A multitude of established residential developers such as Sansiri, Ananda, Pruksa and AP(Thai) have also joined the fray, launching residential Condos to cater for the growing demand for this appealing area. It is important to note that Thailand’s Stock Exchange (SET) has relocated to the area and numerous Grade-A Office Towers have recently been launched. This has inevitably solidified Rama IX-Ratchada’s position as a vibrant business and residential hub!

Read more about this area: Rama IX-Ratchada Bangkok’s Next CBD? Water has a soothing effect on the soul and Bangkok’s riverside offers one of the City’s most scenic and peaceful environments. The natural beauty of the Chao Phraya River and the riverside’s strategic proximity to Bangkok’s financial district (Silom-Sathorn) is contributing to the areas’ growing popularity! Numerous super-luxury residential projects are currently under construction, such as The Residences Mandarin Oriental, Four Seasons Private Residences and Canapaya Residences. On top of this, the area will soon welcome Icon Siam an ambitious mixed-use project with retail, commercial and residential components. This is inevitably shifting the local property market and repositioning this once underrated corner of the city into an “exclusive and desirable” enclave.

On a final note, it is important to point out that the Riverside-Thonburi will soon welcome Mass Transit extensions; this will connect this currently underserved area to Bangkok’s commercial centers. Thus reinforcing the desirability of the area and developing its appeal as a convenient and laid-back residential hub. 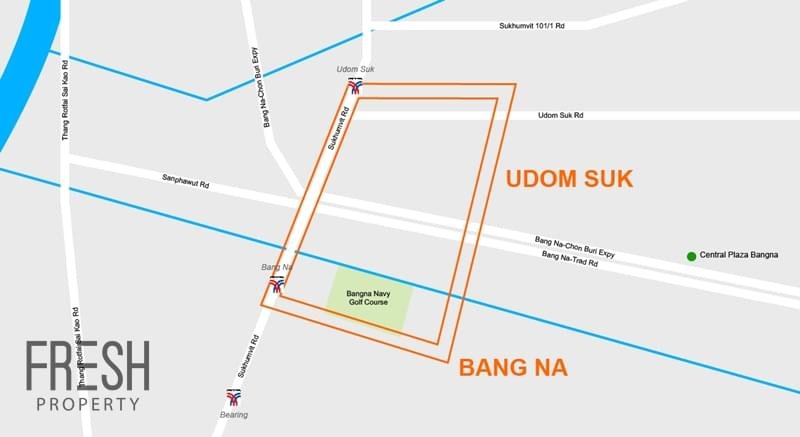 Prices of Condos in Bangkok’s CBD are soaring to unprecedented levels. This has forced developers and homebuyers to consider locations in peripheral areas that offer travel convenience and value for money. Udom Suk- Bangna neighborhood is one of the prime benefactors of this market trend!

At present the area is experiencing a development boom both commercial and residential. On the residential-side, established developers such as Ananda and Origin are launching a series of Condos to cater for the growing demand both local and foreign for the area. Udom-Suk-Bangna is also transforming into a vibrant retail and commercial hub. Some notable projects underway include Whizdom 101 a mixed-use project comprised of retail, commercial and residential elements. BITEC Bangna the trade and exhibition center has recently launched Bhiraj @ Bitec an A-Grade Office Tower aimed at transforming the area into a convention and exhibition business hub. Finally, The Mall Group developers and operators of EmQuartier have announced the development of Bangkok Mall a massive development that will spread over 100-Rais. Many will argue that these two locations are already somewhat established as popular residential hubs and have no place in the “up-and-coming” category. This is somewhat true, as the areas are now viewed as popular and good-value places to live by local and expat working professionals. On top of this numerous developers, have already launched a multitude of condominiums in both neighborhoods. However despite being popular residential hubs, Phra Khanong- On Nut are somewhat lacking in commercial, retail and general leisure venues (Especially in Phra Khanong). Both locations have not reached their full potential and still have the capacity to transform into even more desirable and appealing locations. Interestingly gentrification is underway, with Phra Khanong about to welcome Summer Hill (Community Shopping Mall) and Century Mall about to be launched in On Nut. Once seen as a gritty, industrial and rough area some of the Capital’s top property consultancies are now touting it as Bangkok’s “Next Sukhumvit Road”. Gentrification is gradually transforming the area and Rama IV in recent years has seen the launch of numerous ambitious commercial and retail projects. This includes FYI Centre an A-Grade Office Complex and Hotel and even the launch of Suanplern Market a Community Mall. However the big landmark project that has really ignited the possibility of a Rama IV transformation is the announcement of “One Bangkok” by Charoen Sirivadhanabhakdi’s TCC Group. Spread over an extensive 104 Rai Plot, this luxury mixed-use development will comprise of residential, retail and office elements. Located on the Lumpini-end of Rama IV it is promising to transform the area’s dynamics, repositioning it as a prime residential and commercial hotspot!

Compared to other countries in Southeast Asia, Thailand’s visa laws and residency programs for expats and long-term foreign residents tend to be relatively stringent and cumbersome! The paperwork, eligibility requirements and limited long stay...Read More This has been a quiet year for Bangkok’s real estate market, with most developers staying away from major project launches instead preferring to focus on Outer Bangkok locations and low-rise housing developments. This is...Read More